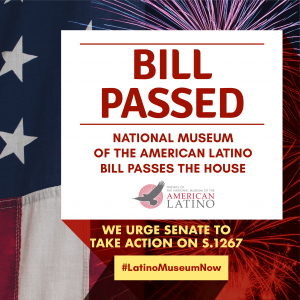 It was over 10 years ago when then President President George W. Bush (and later enacted by President Barack Obama) signed into law the legislation to create a 23-member Commission to Study the Potential Creation of a National Museum of the American Latino. And here we are now still with no signs of anything.

However, in July 2020 the House of Representatives approved the National Museum of the American Latino Act (H.R. 2420), legislation to establish the long-overdue museum on the National Mall in Washington, D.C. dedicated to commemorating the 500 plus years of American Latino contributions to the nation’s military, sciences, economic power, civil rights and the arts.

It was actually in 1994 when a report titled Willful Neglect was released by the Smithsonian Institution Task Force on Latino Issues. The report recommended, “The Smithsonian must commit itself to making Latino initiatives a permanent part of the Smithsonian budget, and Latino experts in sciences, art, history, and technology a permanent presence at the campus on the National Mall and throughout the Institution’s international complex of facilities and programs.”

Since then both the the National Museum of the American Indian and the National Museum of African American History and Culture have opened. There was opposition to create another museum stating the Smithsonian should focus on improving the museums that it already had. And yes it will cost a pretty penny (estimated $600 million with a private fund-raising goal of $300 million) but the results would be enormous.

So. All this to ask if you think this museum will still open?